I started work on A Year In... in April this year, just after finishing Kingdom Dice. It ended up taking a bit longer, but luckily I've saved files of each version, so I can do a step-by-step of how it evolved. 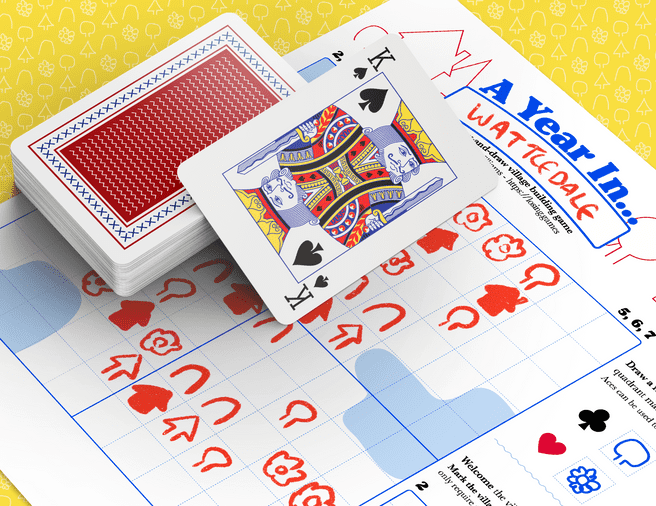 It was meant to be another quick 2-3 week project, after Kingdom Dice showed that the one-page roll and write format was a fun one to design for, but it ended up taking a bit longer.

The first version laid down the bones. I knew it would use playing cards as a randomiser, and that it would be about drawing a little town and matching patterns. 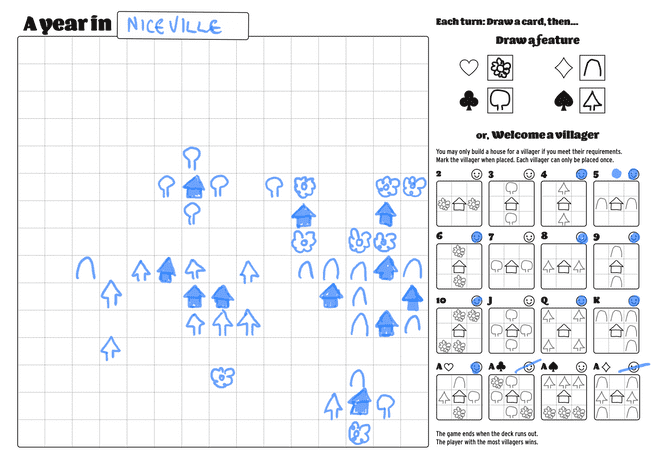 One cool thing you might not know about playing cards: Each one has two different pieces of information on them! The density is off the charts!

The first version worked, but definitely felt very amorphous and directionless. Why should I place this feature here? Why go for this pattern over that one?

Version 2 tried to remedy this by shrinking the play area and adding some oddly-shaped lakes. Which didn't really work. It was more pressured, but didn't solve the issue of not feeling like there were any tricky decisions to make. 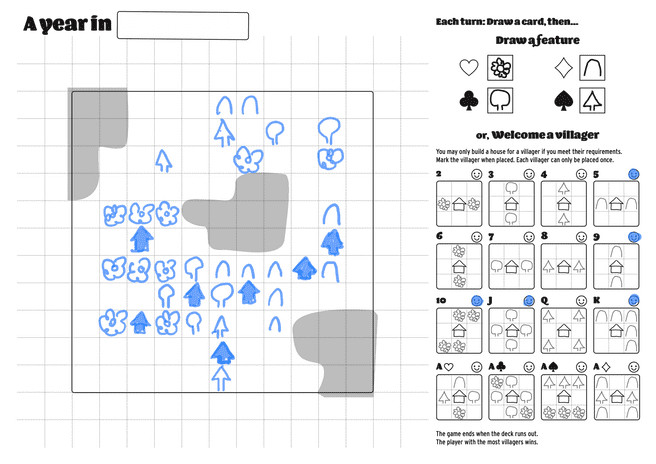 Then I (or someone in my game design group chat) had the brilliant idea of tying cards to quadrants on the map. Suddenly it felt more like a game. There were tricky decisions and gambles. 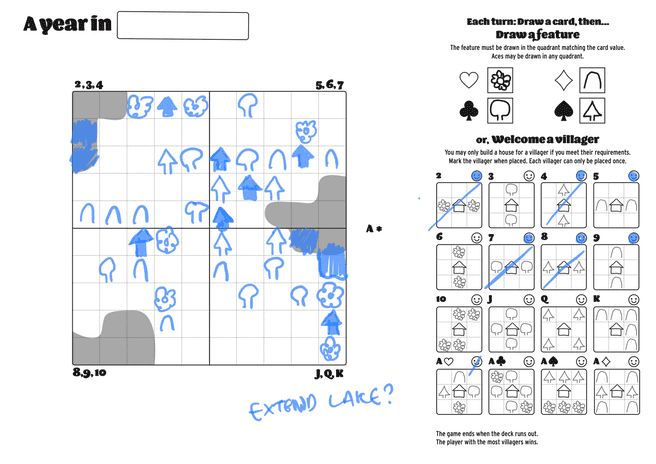 There was still a problem (which would haunt me til the end), that sometimes you just didn't have anything good to do with a turn. There was no pattern you could match, and no useful place to put a feature.

Version 4 attempted to give you something to do with a card when you didn't want to place a feature — extend a lake instead! It worked... okay, but just didn't feel thematically compelling and you would again end up in a situation where there was not much to do. 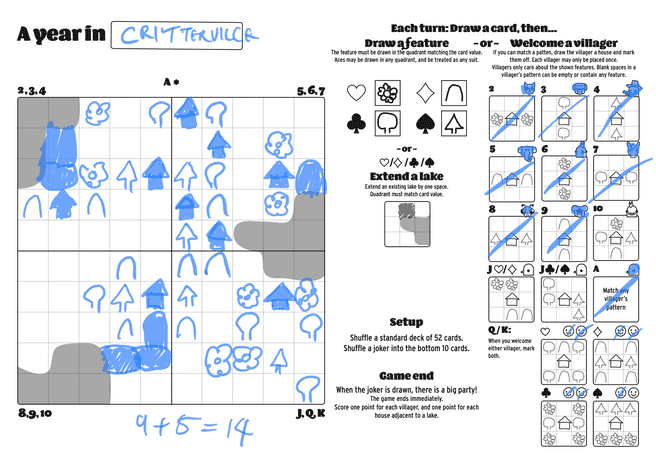 This version started replacing the :simple_smile: villagers with cute animals. It was April and I was playing a lot of Animal Crossing, so knew that collecting a village of cute animals is very satisfying.

Version 5 introduced a party! Instead of drawing a feature of welcoming a villager, you could spend a card to mark a track, earning a bonus point if you filled it. It gave you something to do, but felt disconnected from the rest of the game. 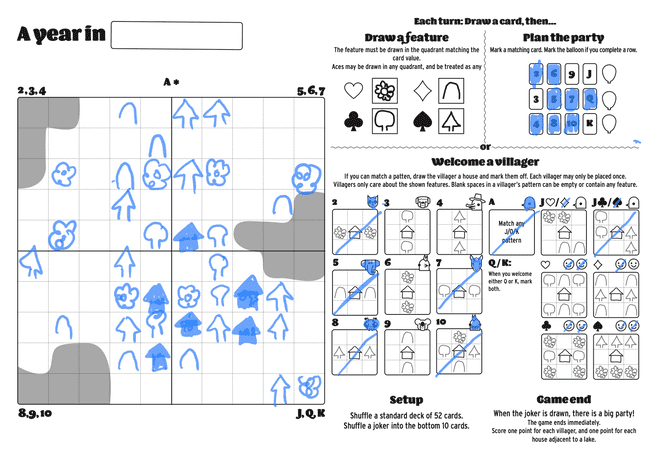 Version 6 added the stores! Now it's looking pretty close to where it finished. The stores felt good, and much more connected to the map game — you had to plan out what you were doing to leave space. 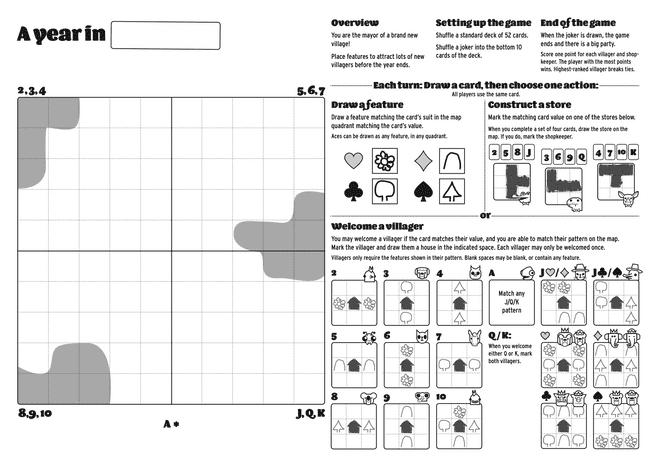 ...but not that much space, which is why version 7 made them more annoying shapes, and harder to fit into the board in the late game. 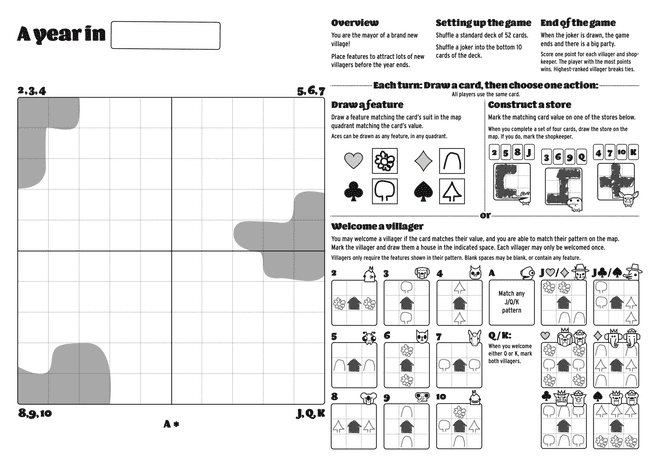 And that's where I left it for 6 months. It felt pretty good, but not done, and all of my writing, playtesting and drawing time needed to be spent on finishing the extended edition of Mausritter.

Six months later, Mausritter was done and it was time to close out old projects. With version 8 I decided to go crazy and add some colours. First ugly... 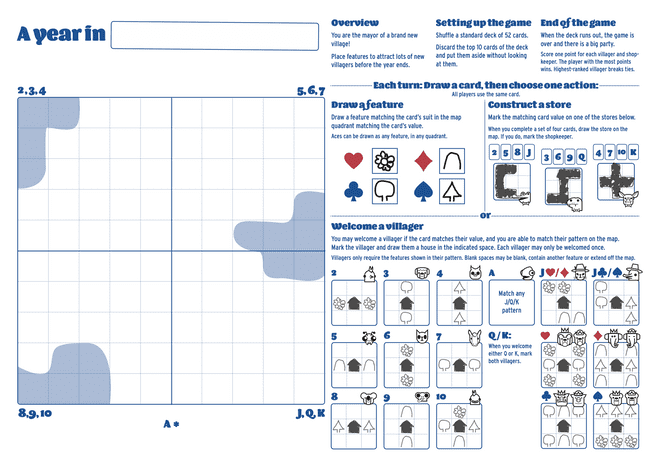 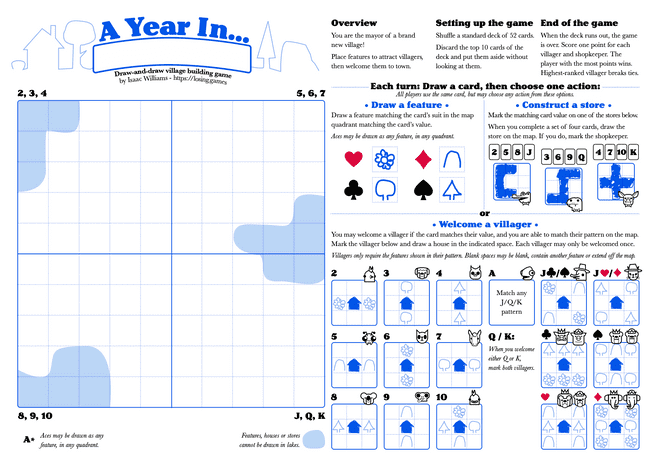 Version 10 took a short detour into changing out the Stores for Paths — the idea there was to give a bit more creative control, and make the judicious use of paths an avenue for higher-skill players. 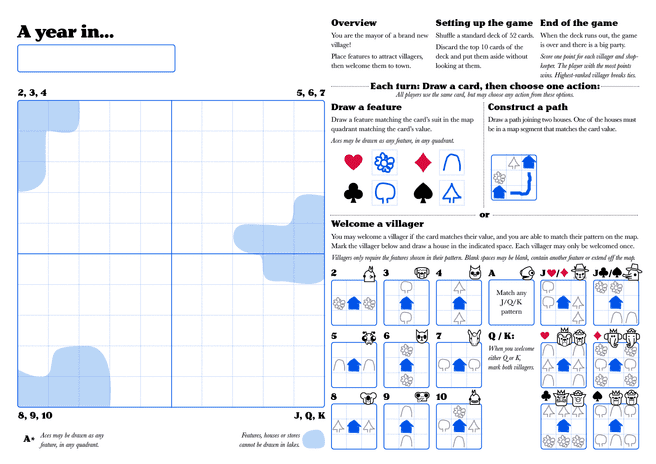 This didn't work. Because the paths rely on players already having houses on the map, the lack of an early-game outlet for cards that aren't serving a useful purpose got back to the bad game-feel of the variants before the Store.

In version 11, the Stores were back but the patterns required for K/Q/J villagers had gotten bigger and more challenging to match. 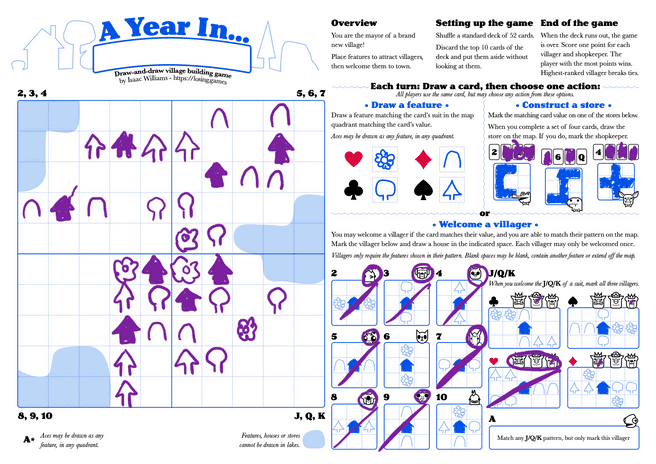 This was the higher-skill activity I was looking for. Creating the patterns for the K/Q/J is requires planning from the very start of the game. The reward of three villagers for their completion matches the challenge and gives players something to aim for.

At this point, I was ready to call the game done. Version 12 was just tweaks to formatting. 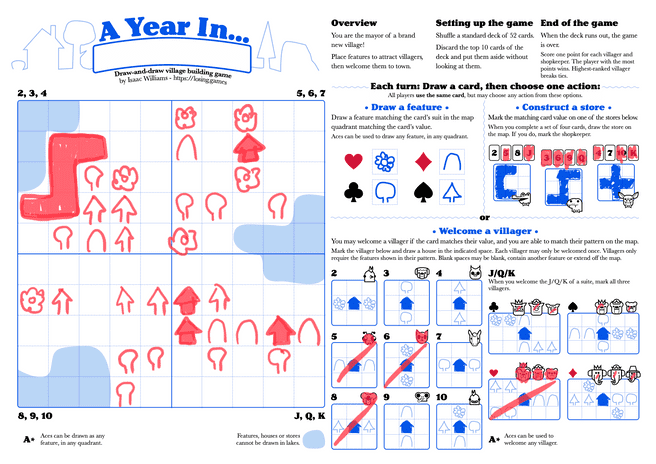 And version 13 was final experiments with scoring. Attempted to try the 1 point per house adjacent to a lake rule from all the way back in version 4. This still felt unsatisfying and didn't really add a meaningful differentiation between player's scores. You would just cluster around lakes instead of not doing so. 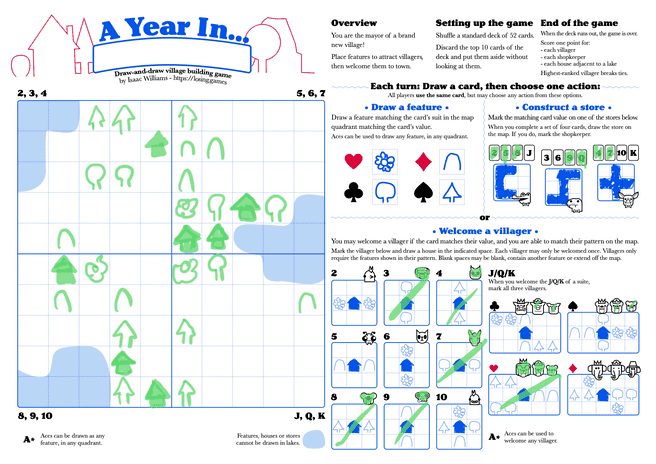 Version 14 took a final pass at formatting, tweaks to some of the wording for clarity (thanks to Peter C. Hayward — check out his games, they're good) and it's a finished game. 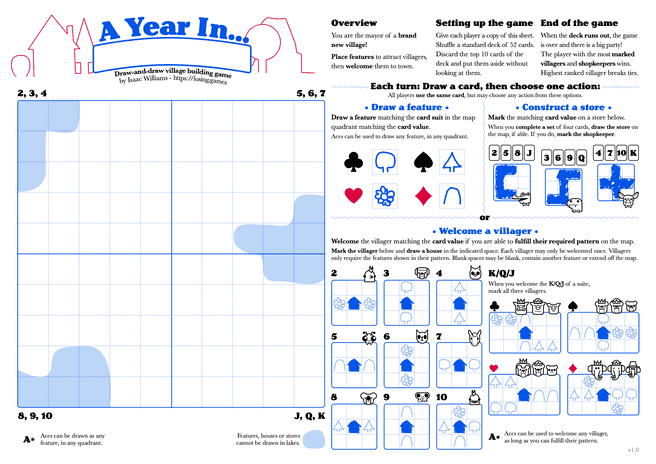 There's definitely still issues with the scoring and some of the late game, depending on how the card draw goes. But it's still a fun and interesting little puzzle. Drawing little trees and flowers, and colouring in a house when you finally earn it is very satisfying.

Go give it a play, and leave a review or let me know on Twitter (@isaacwilliams) what you think!